It’s a national debate that most likely will never be resolved, just how do you pronounce scone? And what comes first, the clotted cream or the jam? What we can all agree on though is that afternoon tea has to be the most decadent of meals -unlimited cakes, freshly baked scones, Champagne, pot after pot of tea, spoonfuls of indulgent cream.

What is also a given is that when it comes to afternoon teas, London’s hotels and restaurants certainly know how to create winners. So to celebrate Afternoon Tea Week which runs from the 9th -15th August we have rounded up some of our favourites for you to try. 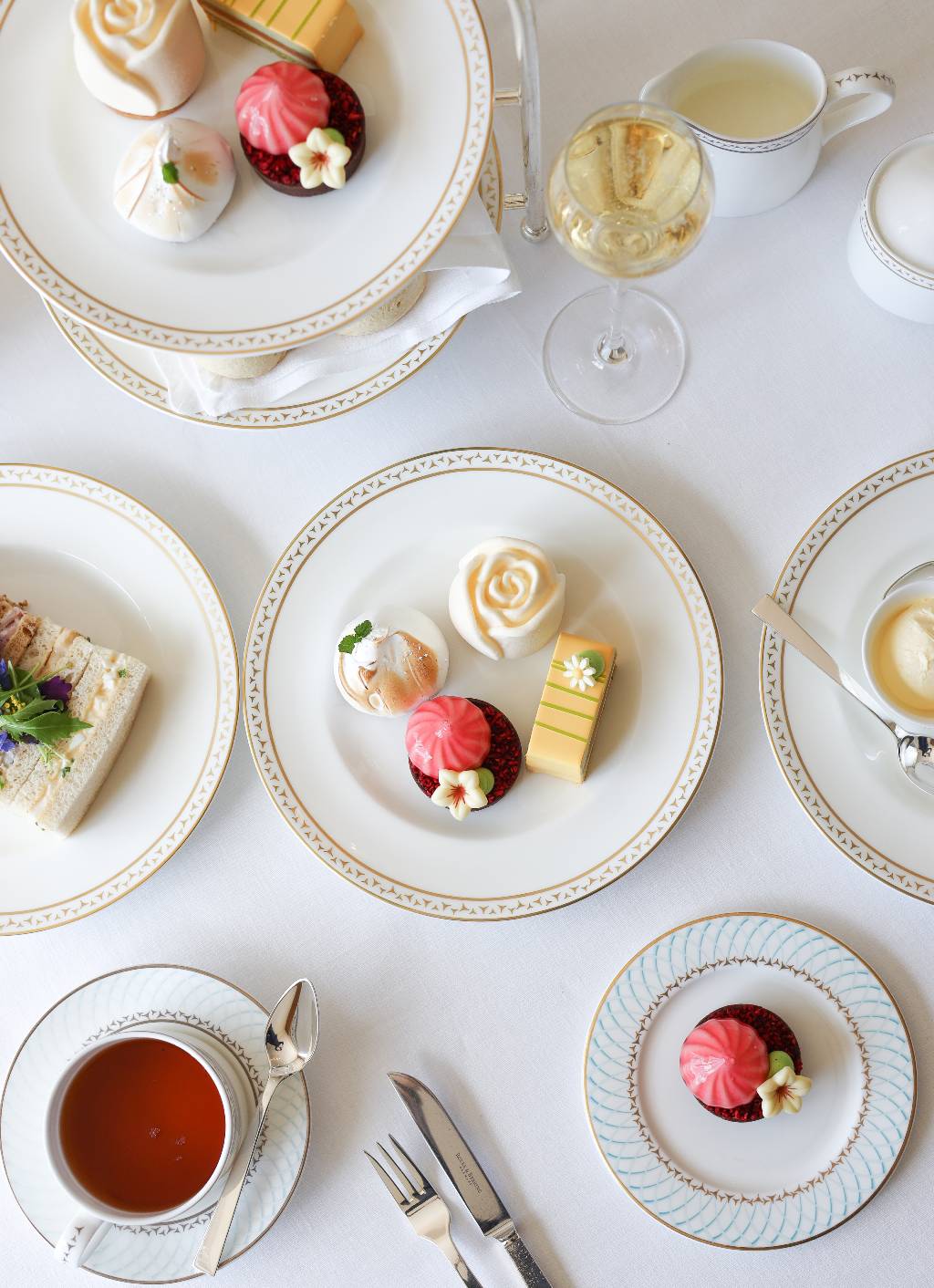 Summer Afternoon Tea and Limited Edition Cocktails at The Dorchester

Afternoon tea at The Dorchester is a must. Filled with cake and full of tradition it’s a decadent way to spend the afternoon, or morning because until the 31st August they are serving tea from 11am Monday to Friday. Come with an appetite because the tea is a veritable feast of sandwiches and pastries including Norfolk Angus Pastrami, with Hertfordshire watercress and grain mustard mayonnaise on wholemeal bread; warm plain and raisin scones served with Cornish clotted cream and The Dorchester Rose jam and a peach and pistachio slice. And to celebrate Afternoon Tea Week they have created a new, complimentary, limited edition cocktail, Tropical Fizz, made with Lapsang tea-infused Bombay Sapphire, honey, St Germain liqueur and a dash of champagne. Bringing your little ones along? The Dorchester has also just launched their August Children’s Afternoon tea created by children at the Manorfield Primary School. 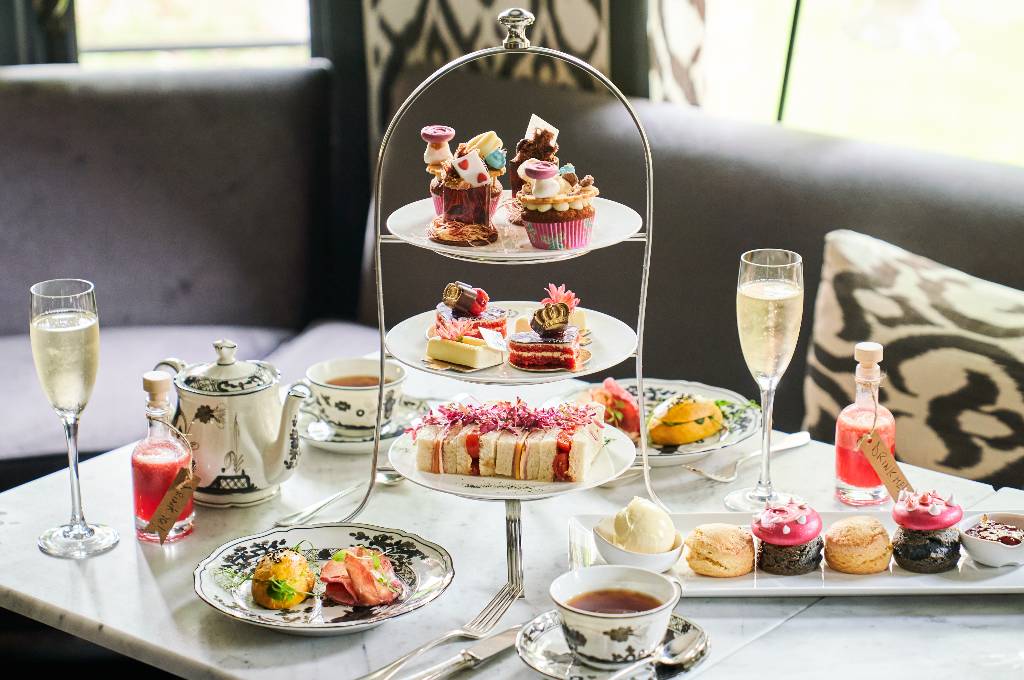 Alice at The Franklin

Inspired by the Alice: Curiouser and Curiouser exhibition at the nearby V&A, The Franklin London’s new afternoon tea imagines what a modern day Alice might want to eat after her adventure through Wonderland. Maybe a beetroot pita with burrata cheese and bresaola (also a nod to The Franklin’s Italian hospitality heritage) or perhaps she would have wanted a crab bun filled with crab salad, soy mayo, avocado, cucumber and lime. After scones, including a blueberry scone topped with a meringue made to look like a mushroom, there’ll be cakes including a brownie top hat, a red velvet sponge heart cake and a carrot caramel cupcake. And if you haven’t been to the exhibition yet there’s also the option to book a pre-booked ticket to be used the same day as you enjoy afternoon tea. 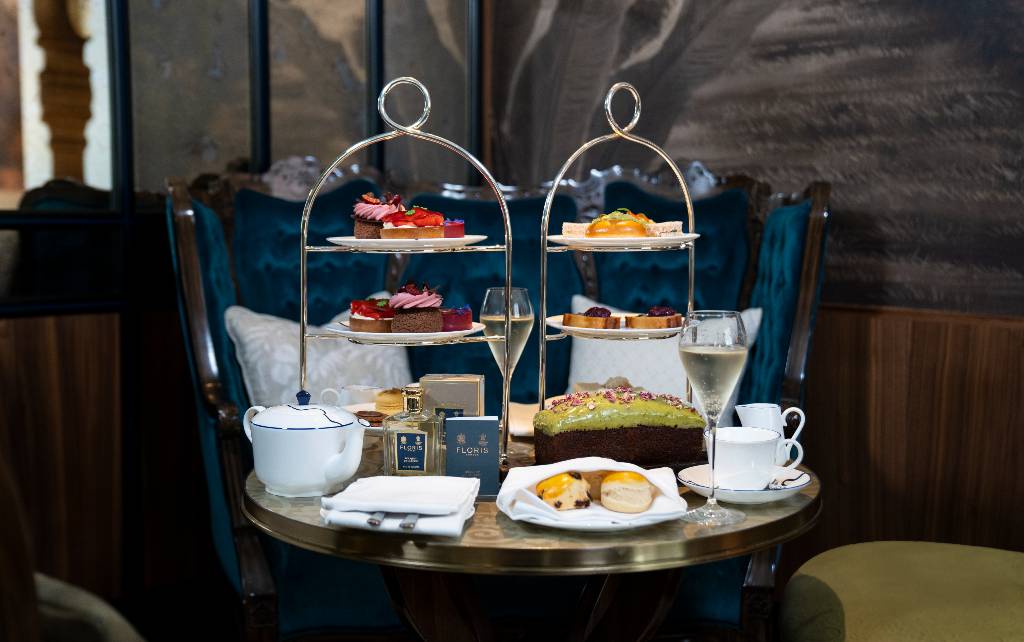 Great Scotland Yard have collaborated with Floris London for the launch of their new afternoon tea ‘Bouquet De La Reine.’ Served in the hotel’s Victorian parlour, the tea is inspired by the fragrance, created by Mr Floris as a wedding gift for Queen Victoria in 1840, 20 years later the fragrance was added to Floris’ repertoire and a contemporary adaptation was made for the Golden Jubilee of Her Majesty The Queen. Sandwiches are filled with the likes of Guinness Béchamel Gougère and smoked salmon and cucumber whilst scones are served with Cornish clotted cream and strawberry and elderflower jam. Fragrant pastries and cakes include a mango and jasmine macaron, rose and pistachio drizzle cake and blackcurrant and yoghurt gateaux. Throughout Afternoon Tea week it will be served Monday to Sunday. 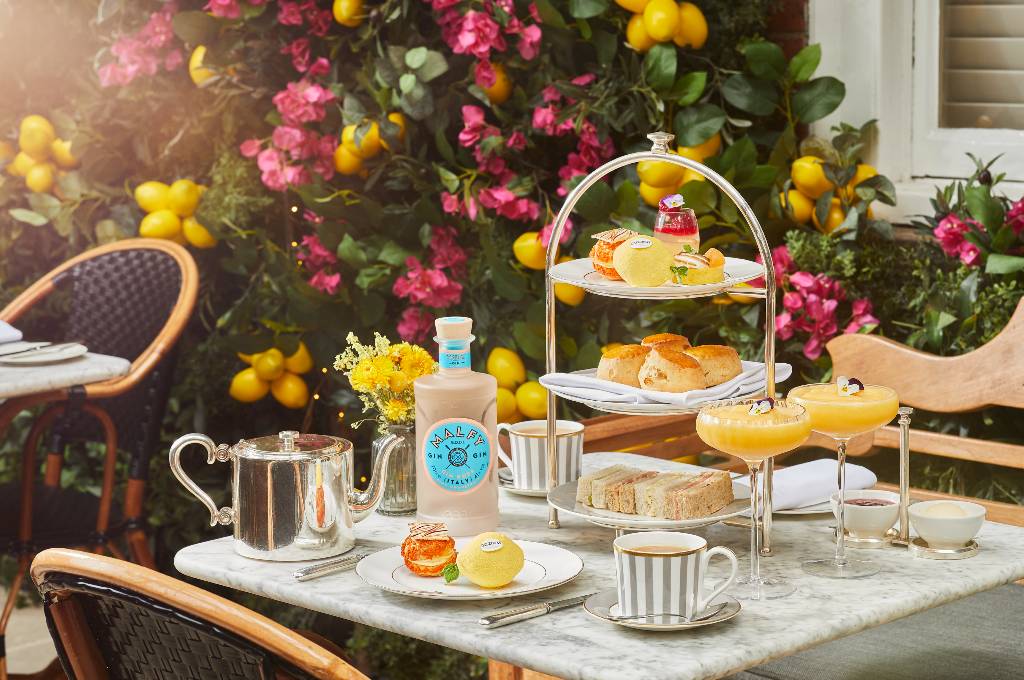 When life gives you lemon you use them to decorate your terrace and then create an afternoon tea around them! This summer the Instagrammable Dalloway Terrace has had a gorgeous new transformation inspired by the Amalfi Coast thanks to florists McQueens and to go with it a new afternoon tea featuring dishes such as Malfy Gin cured Scottish salmon, beetroot, horseradish and dill remoulade and sweet treats also infused with Malfy Gin. It’s like an afternoon Italian escape. 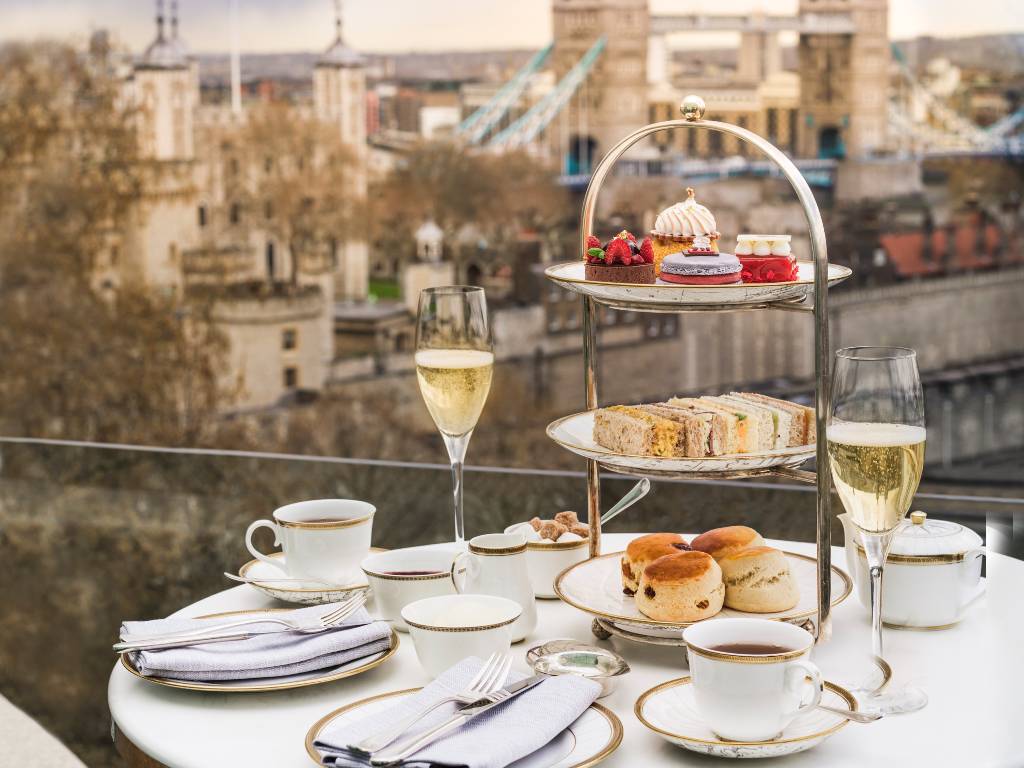 Inspired by the nearby Crown Jewels, Rotunda’s afternoon tea starts with classic British sandwiches like minted cucumber and Coronation chicken before moving onto jewel theme cakes. Giving a nod to the imperial state crown, The Ruby is made with chocolate, red cherry and green cardamom whilst The Coin is inspired by the Tower of London’s commemorative coins and is made with orange and black sesame. Naturally, there’ll be plenty of scones and champagne which includes Delamotte Brut, Charles Heidsieck and AR Lenoble Rosé. If you want to make it extra luxurious then you can also book a private roof terrace where you can overlook the Tower of London and the Thames. 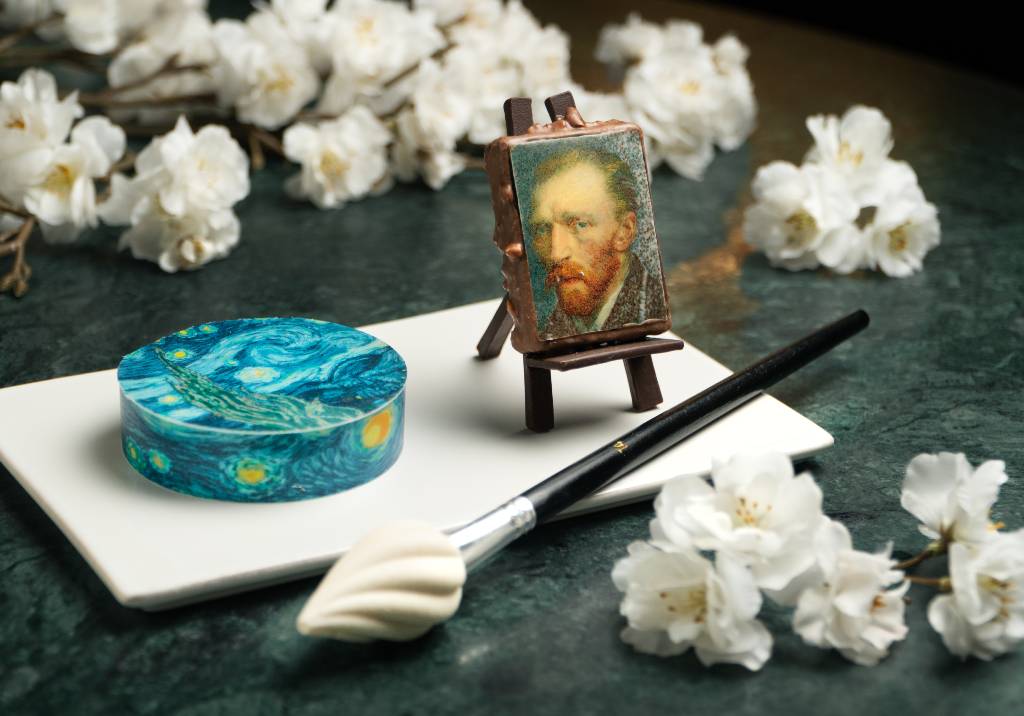 Served in the spectacular Oscar Wilde Lounge, Hotel Cafe Royal’s new afternoon tea, takes on a historical and magical tasting journey through Van Gogh’s most famous art works. Start with an amuse bouche of smoked tomato tartar and crostini and a pulled lamb and marrow bone tart before sandwiches including Black Garlic Aberdeen Angus roast beef with fresh horseradish on tomato bread. Scones are served with clotted cream, strawberry jam and an Earl Grey tea jelly but it’s the delicacies where the magic really comes alive. You’ll find a paint brush made from lemon crème fraîche ice cream, the vase of sunflowers made with sunflower seed praline and salted caramel, Van Gogh’s self portrait is recreated with pecan crunchy and coffee mousse whilst The Starry Night is made with pink grapefruit compote and orange marmalade. The tea is in partnership with the Van Gogh Alive, the most visited immersive experience globally and one that if you haven’t already been to, you definitely should. 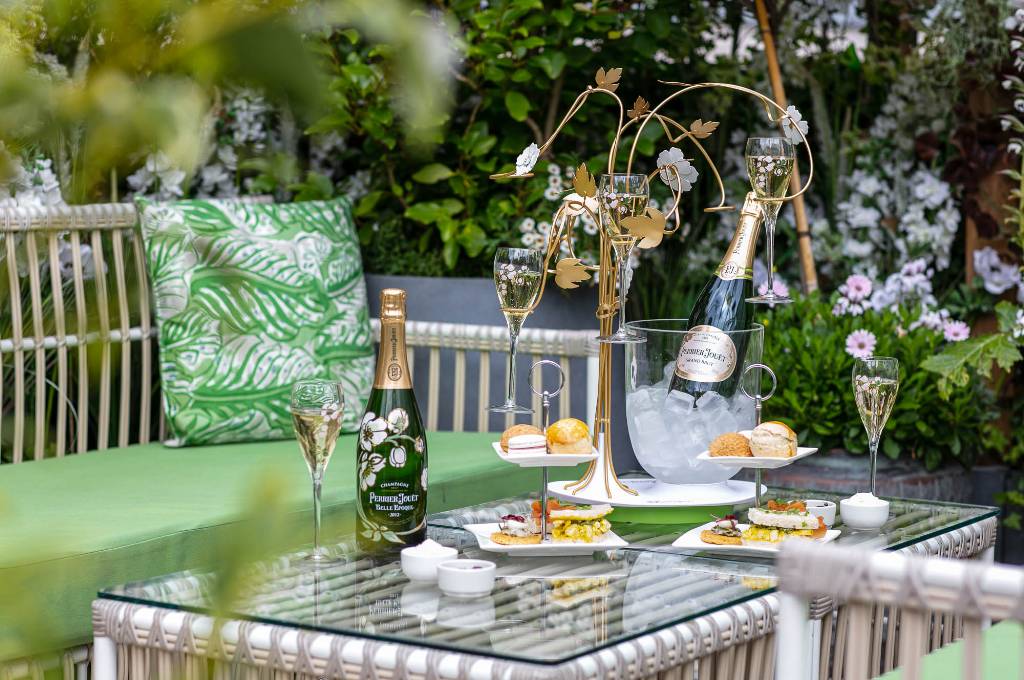 Women’s member’s club AllBright has partnered with female co-founded Perrier-Jouët Champagne to create an afternoon tea which will be served above the streets of Mayfair on their rooftop. Adorning the terrace will be bright wisteria and the signature Perrier-Jouët white Anemone flower whilst the afternoon tea will feature delicate ‘Wild Jardin Trees’ with Perrier-Jouët Champagne bottle and flutes suspended amongst their branches. Served daily between 3pm and 5pm until the end of September the tea includes smoked salmon open sandwiches with preserved lemon crème fraîche and dill; Montgomery shortbread with pickled cucumber and quail egg and a glorious sounding choux bun with passion fruit crème pâtissière and ganache. To drink will be, of course, Perrier-Jouët, Grand Brut which you can order by the glass or as we might be inclined to, the bottle. Now who do we know who is a member? 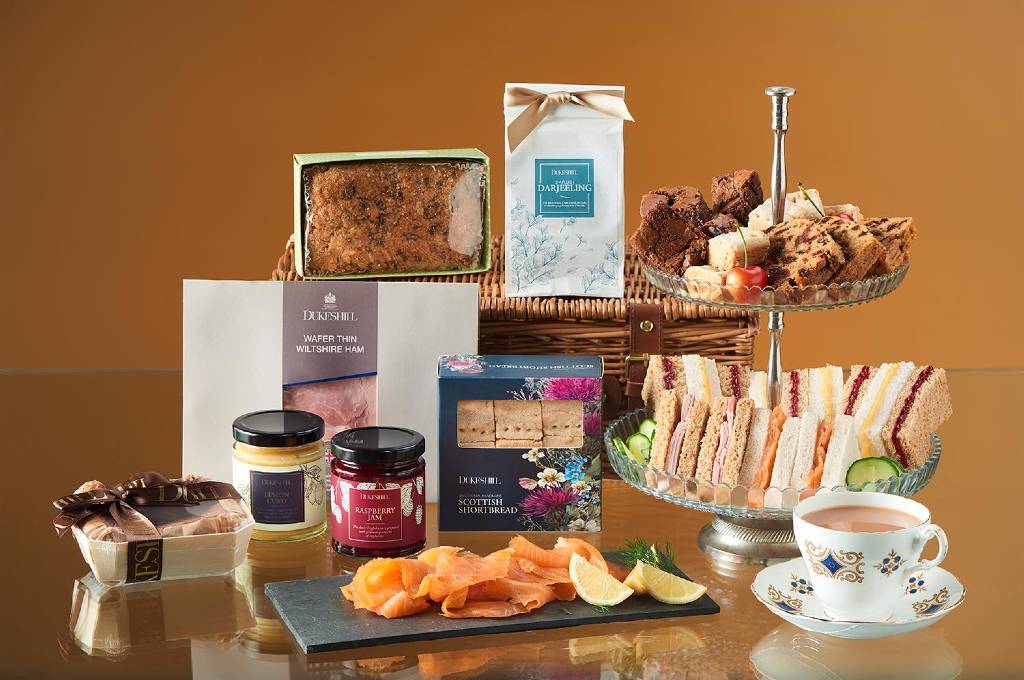 The Afternoon Tea Hamper from Dukeshill

Royal Warrant holders, Dukeshill, might best be known for their cured hams, but alongside their meats, cheeses and pantry items they also sell hampers, one of which is an The Afternoon Tea Hamper. And whilst this isn’t technically from a London hotel or restaurant we couldn’t leave it out as it is perfect for picnic afternoon teas or for serving at home. The hamper is filled with ham, salmon, tea, handmade Scottish shortbread, chocolate brownies, fruit loaf, lemon curd and raspberry jam.